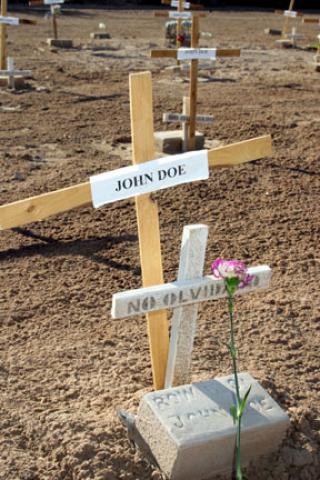 The Washington Office on Latin America (WOLA) recently published Mexico’s Other Border Security, Migration, and the Humanitarian Crisis between Guatemala and Mexico. The excerpts from its executive summary below were published in the July-August 2014 NewsNotes:

"Along the U.S.-Mexico border, especially in south Texas, authorities are stunned by a sudden wave of migrants from three Central American countries: El Salvador, Guatemala, and Honduras. The U.S. Border Patrol is on track to apprehend over four times more citizens of these countries in 2014 than it did in 2011.

"An alarming number of them are unaccompanied children. In the first eight months of fiscal year 2014, Border Patrol encountered 34,611 children from those three Central American nations traveling without adult relatives -- up from less than 4,000 in 2011. ...

"The real humanitarian emergency is not just in south Texas shelters and detention facilities. It runs along the entire migration route to the United States, from the violence-torn slums of Central America, to Mexico’s treacherous train lines and crowded detention centers, to the forbidding deserts on the U.S. side of the border where hundreds die each year. ...

"On this southern border, [WOLA] found a sharp rise in migration from El Salvador, Guatemala, and especially Honduras. Officials and migrant shelter workers are encountering dramatically more women, children, and families bound for the United States. Their numbers are taxing an already fragile system trying to provide humanitarian assistance to this vulnerable population. The migrants are being forced out of their countries of origin by unemployment, lack of economic opportunities, and some of the worst criminal violence in the world, including intolerable levels of homicide, extortion, abuse, and recruitment by street gangs. Almost no migrants mention being motivated by any perception of changed U.S. immigration policy or lax border security.

"As Mexico’s Other Border describes, it is easy to cross the border from Guatemala or Belize into Mexico, whether by wading, taking a raft, walking through the countryside, or passing through an official crossing. WOLA staff crossed four times without having to show a passport. The majority of the cocaine consumed in the United States also crosses here. Once in Mexico, though, Central American migrants face an official border security strategy that is hard to define, at times contradictory, and unevenly implemented; but the policy has clearly been tightening, often with U.S. backing.

"Mexican border security toughens inland from the borderline. Roads and rivers are heavily policed: in one 140-mile stretch of highway near the border, WOLA’s staff passed through 11 checkpoints run by nine different federal and state agencies. Security forces’ presence and capabilities are increasing, with U.S. backing, in both Mexico and Guatemala. However, these law enforcement, military, migration, investigative, and intelligence agencies are poorly coordinated, suffer from endemic corruption, routinely extort migrants, and manage to stop only a tiny fraction of U.S.-bound drugs.

"The southern border has two lines of northbound cargo trains that are policed far less than the highways. For tens of thousands of Central American migrants these trains are the main option for getting across Mexico. The long ride atop the train is physically dangerous, and the lack of security leaves migrants at the mercy of Central American gangs, Mexican cartels, bandits, kidnappers, and corrupt officials. Migrants traveling on the trains and along Mexico’s highways are easy victims, as reporting crime to the police means risking deportation. The stunning frequency of kidnapping, extortion, human trafficking, rape, and homicide puts the plight of Central American migrants in transit through Mexico atop the list of the Western Hemisphere’s worst humanitarian emergencies.

"As the situation worsens, Mexico, the United States, and Central American nations need a new approach to security and migration in the ‘first crossing’ zone. Following the U.S. prescription of barriers, patrols, soldiers, and technology, though, could do more harm than good.

"There is already a significant security presence in southern Mexico: statelessness is not the issue. Instead, in a situation where enforcement personnel are poorly trained, have little coordination, and are not held accountable for corruption or abuse, adding still more uniformed personnel, checkpoints, and surveillance could increase abuses and trigger more violence, without actually reducing migrant flows or trafficking.

"The most promising solutions are the most difficult to implement politically. The United States needs a comprehensive immigration reform that sets clear rules for pathways to citizenship and addresses agriculture work programs, immigrant and work visas, and future immigration flows.

"Mexico should expand the use of humanitarian visas and similar mechanisms so migrants who are victims of violence or abuse, and unaccompanied minors, can go to the authorities without fear of deportation. Mexico’s judiciary and internal control units need dramatic improvements so that they may investigate and sanction officials who commit human rights violations and other abuses, and to stamp out corruption, the oxygen that sustains violent criminal groups. And Central American governments and elites need to start protecting their citizens against violence and investing in education and job creation at home. These recommendations will be either a heavy lift or slow to implement. In the meantime, Mexico’s Other Border recommends several smaller steps that governments can take now, if not to solve, then at least to mitigate the abuses and begin to address the crisis of border security and migration in the Mexico-Guatemala border zone. These include the following:

Resources available from the Latin America Working Group include videotaped interviews with two human rights workers, Sr. Leticia Gutiérrez and Juan José Villagomez, who describe reasons people are migrating from Central America, and the perils they face in Mexico. Watch the videos (in Spanish with English captions) here.

In June, Maryknoll Sister Dee Smith, who lives and works in Guatemala, wrote us a heartbreaking note:

"A young woman, ‘Beatriz,’ is the first cousin of two co-workers of ours ... She left her small village of Flores Costa Cuca, Guatemala [in May] to migrate illegally to the U.S. She is a single mother of a four-year old boy whom she left with her parents. Her intention was to build a better future for her son as she had no employment opportunities in Guatemala. She called the family three or four times on route through Mexico to say she was safe and optimistic of arriving at the border within the month. She was travelling in a small group of eight people including two couples from the village. They all crossed the border in southern Texas and were walking towards the main road to be picked up by the truck when she started with convulsions and coughing up blood. She died on the spot just 20 minutes from the roadside. The tragedy is the group had to leave her there and walk to the pickup. One of the couples took her cellphone and began calling the numbers to inform the family of what had happened.

This happened [in mid-June] and up to this moment they haven't recovered the body. That's the REALITY of forced migration for many of our people in Central America … As you can imagine we are all devastated at what has happened and the anger it generates in us because the injustice is tremendous, yet we feel impotent."

In mid-July, the Maryknoll Office for Global Concerns joined a number of other faith organizations in signing a letter to national leaders, urging a humanitarian response to this crisis. "While we appreciate the U.S. government's attention to the humanitarian crisis faced by migrants from Central America, we strongly object to proposals to detain families with children and to any move rollback the Trafficking Victims Protection Reauthorization Act (TVPRA) in order to effect expeditious deportations. Forcibly and hurriedly returning people in need of international protection back to the dangerous situations they fled without adequate due process would undermine our obligations under international law and our position as a global humanitarian leader and would be a moral disgrace...."