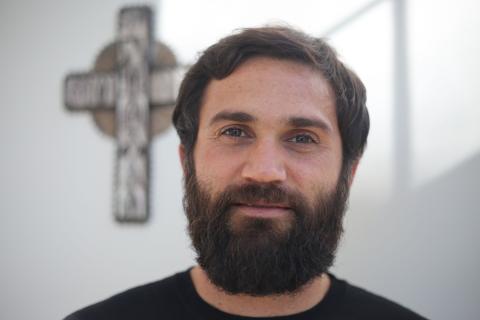 Isaac S. Villegas (pictured), pastor of Chapel Hill Mennonite Fellowship and board member of the North Carolina Council of Churches, shared the following reflection at the “Loving Our Neighbor: Embodying Sanctuary” conference at Duke Divinity School on January 28, 2017. It was published in the March-April 2017 issue of NewsNotes.

When the famine had spread over all the land, Joseph opened all the storehouses, and sold to the Egyptians, for the famine was severe in the land of Egypt. Moreover, all the world came to Joseph in Egypt to buy grain, because the famine became severe throughout the world.

When Jacob learned that there was grain in Egypt, he said to his sons, ‘Why do you keep looking at one another? I have heard,’ he said, ‘that there is grain in Egypt; go down and buy grain for us there, that we may live and not die.’

A lifetime ago, in San Jose, Costa Rica, my grandfather—a teenager at the time—held his infant sister as she cried her last breath. My grandfather could do nothing as his baby sister died of malnutrition. She was the second of his siblings to die while cradled in my grandfather’s arms.

A decade later, he and his wife, my grandmother, had five children of their own, and there wasn’t enough to eat at home. They didn’t have the means to feed them—not enough work, not enough money, not enough help. So my grandfather made his way to New York City, then Miami, then Los Angeles, working in restaurants, scrubbing dirty dishes.

Every payday he would send half of the money back to his wife, to feed their children, and the other half of the paycheck he would hide under his mattress, saving enough to bring his family to the United States, to economic stability.

This is my family’s story—my mother, as a girl, brought across border after border, so she wouldn’t hunger. Her family joined the multitudes of their generation, all suffering from the economic warfare led by United Fruit Company, Standard Fruit, Dole, Chiquita—companies that turned Central American countries into banana republics, buying local elections and laying waste to sustainable economies, stretching the reach of U.S. dominance further and further south.

In Genesis, when Jacob hears about food in Egypt, he tells his sons to go. “Go down and buy grain for us there, that we may live and not die.” With these words, the sons of Jacob cross into a foreign land, because they won’t let their people die from the famine.

Hunger is powerful, a force of nature. Hunger is a burning in the stomach, flaring us to mobilization, igniting our migration, kindling our desire to live, to struggle for life. Jacob and his family are fueled by hunger for life. But Egypt doesn’t care about their lives. Egypt only cares about its economy, its ability to use foreigners to fill the national treasury. Egypt opens up the storehouses for the sake of economic gain, for nationalism. Egypt first.

“All the world came to Egypt to buy grain,” it says, “because the famine became severe throughout the world.” Capitalism extracts money from bodies, resources from land, capital from labor. The lifeblood of capitalism is the ability to liberate money, to let it migrate, to cross borders, while restricting the flow of people.

The connection between Jacob’s family and Egypt, Central America and the United States, my body and yours—the connection that makes us who we are— has everything to do with who has the power to manage the flow of people and money across borders.

We—as a people, as a community, as a church—can only be who we are allowed to be by those who regulate our borders and economies. Who we are, who we love, how we worship, who we worship has everything to do with global migration patterns, with famines and wars, with hunger, with Jacob sending his sons to Egypt, and with my grandfather holding his dying sister as his country was transformed into a banana republic.

Now a new king arose over Egypt, who did not know Joseph. He said to his people, ‘Look, the Israelite people are more numerous and more powerful than we. Come, let us deal shrewdly with them, or they will increase and, in the event of war, join our enemies and fight against us and escape from the land.’ Therefore they set taskmasters over them to oppress them with forced labor. They built supply cities, Pithom and Rameses, for Pharaoh. But the more they were oppressed, the more they multiplied and spread, so that the Egyptians came to dread the Israelites.

By 2050, according to the U.S. Census Bureau, white people will no longer be the majority racial group in the United States. Latinx peoples will be nearly 30 percent of the population. By 2040, Muslims will make up the second largest religious community in the United States. In that same decade, Islam will become the largest religion in the world.

The election of Donald Trump as president is white America’s fighting effort to socially engineer a future that isn’t so brown. The advisors to President Trump know the demographics, the population trends. Their response is a wide-ranging detention and deportation strategy, and refugee protocols set up to turn away Muslims, in an attempt to manufacture our population, to keep America as white and as Christian for as long as possible.

In the passage from the book of Exodus, a new king is overwhelmed with fear of foreigners. “Look,” he says, “the Israelite people are more numerous and more powerful than we,” so the king’s administration oppresses them. But, the text says, “the more they were oppressed, the more they multiplied and spread, so that the Egyptians came to dread them.”

Gloria Anzaldúa, the Chicana poet, once commented on what it means to live as a Latina in this country, to refuse to give up her sense of who she is: “The overwhelming oppression is the collective fact that we do not fit,” she wrote, “and because we do not fit, we are a threat.”

When the Egyptians noticed the Israelite population boom, the Pharaoh identified them as a danger to their way of life, a threat to national security. Nationalism lives by fear, fear of strangers, fear of foreigners.

Are you willing to let your identity be constructed by political fear? Or are you willing to allow your understanding of self and others to grow so that “we” become something new and vibrant together? Will you construct your life, your church, in such a way that you no longer know who you are without your foreign neighbor, that you would be lost in this world without her, that your identity would be undone without him?

So they went, and entered the house of a prostitute whose name was Rahab, and spent the night there. The king of Jericho was told, ‘Some Israelites have come here tonight to search out the land.’ Then the king of Jericho sent orders to Rahab, ‘Bring out the men who have come to you, who entered your house, for they have come only to search out the whole land.’ But the woman took the two men and hid them. Then she said, ‘True, the men came to me, but I did not know where they came from. And when it was time to close the gate at dark, the men went out. Where the men went I do not know…’ She had, however, brought them up to the roof and hidden them with the stalks of flax that she had laid out on the road.

Rahab betrays her people. She betrays the security of her nation. She helps two people cross the walls of the city of Jericho. She welcomes two foreigners, even though her people call them enemies, threats. She extends hospitality to strangers who sneak through the night, who climb a wall and hide from Jericho’s patrol units.

Rahab harbors two undocumented immigrants. She offers her home as their sanctuary. Rahab doesn’t obey the king’s orders. She breaks the law. She lies to the authorities to protect the foreigners who have found sanctuary with her.

The question for us in this moment of U.S. history is this: Are you a Rahab? Are you willing to let her life become your life, to turn your home into a sanctuary for people who your rulers have identified as enemies, threats to our national identity and peoplehood?

Because if you are, you should know that you will be known as traitors. Your character will be called into question, like Rahab. And you will be traitors, in a way, because you will be betraying the legacy of white supremacy in this country, the legacy of the founders—the genocide, slavery, patriarchy— a heritage handed down from generation to generation.

Rahab, the one who offered sanctuary. “So the two of them entered the house of a sex worker whose name was Rahab, and spent the night there.”

If you are a Rahab, you can’t help but extend your hands in a gesture of hospitality, in a gesture of protest against this president’s administration, reaching for the people held at airports, held in detention centers, refused entry into our communities, because these policies make you who you are, by decided for you who will be your friends, your neighbors, your coworkers. Without them, you would no longer know who you are, your life undone.