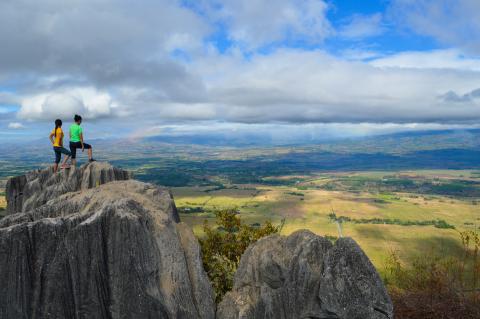 The following article was published in the July-August 2016 issue of NewsNotes and examines the impact of the encyclical Laudato Si’ one year since its publication.

June 18 marked one year since the publication of Pope Francis’ landmark encyclical, “Laudato Si’, On Care for Our Common Home,” in which he spoke with urgency about the desolation of our planet and a ‘throwaway culture’ that is not only affecting the climate, but is devastating the lives of millions of its inhabitants who are displaced, impoverished and marginalized by an economy of exclusion and the “globalization of indifference.”

“I wish to address every person living on this planet” Francis wrote, appealing for a global dialogue to seek solutions to this global crisis: “The urgent challenge to protect our common home includes a concern to bring the whole human family together to seek a sustainable and integral development, for we know that things can change.” (LS 13)

How has the world responded, particularly Catholics, and what has changed in this year? It is hard to exaggerate the significance of Laudato Si’ in Catholic social teaching. Never before has a papal encyclical had the worldwide and ecumenical response that this letter of Pope Francis received. His call for “ecological conversion” has resonated around the globe. Polls indicate that about a third of Catholics have read or are aware of Laudato Si’ and that number say their views on the moral responsibility to fight climate change are influenced by the Holy Father.

Clearly the encyclical had a significant impact on the Paris climate talks, and 900,000 Catholics were inspired to sign the Catholic Climate Petition organized by the Global Catholic Climate Movement, of which Maryknoll is a member. While some dioceses have developed implementation plans and many parishes have held Laudato Si’ study groups, the U.S. church lags behind others, such as the Philippines.

"I think it has proven to be really transformative," said Tomás Insua, co-founder of the Global Catholic Climate Movement. "But there's definitely a long way to go to get this encyclical to really sync in our Catholic identity and really drive transformational change."

Meanwhile our Common Home continues to be in crisis. Along with the increasing routineness of mass shootings, terrorist bombings and never-ending war, Earth and its inhabitants continue to break records:

The National Oceanic and Atmospheric Administration recently announced that May 2016 was the 13th consecutive warmest month on record — the longest streak since global temperature records began in 1880. The last time the planet’s monthly temperature was below average was February 1985, meaning that if you are under 30, there has never been a month colder than average in your entire life.

As noted elsewhere in this NewsNotes, wars and persecution drove over 65 million people from their homes in 2015 and one in every 113 people globally is now either an asylum-seeker, internally displaced or a refugee – unprecedented in modern history.

“At sea, a frightening number of refugees and migrants are dying each year. On land, people fleeing war are finding their way blocked by closed borders.” said UN High Commissioner for Refugees, Filippo Grandi.

“The willingness of nations to work together not just for refugees but for the collective human interest is what’s being tested today, and it’s this spirit of unity that badly needs to prevail,” UN Sec. Gen Ban Ki Moon said.

“We’re stuck here. We can’t go on and we can’t go back,” said Hikmat, a Syrian farmer driven from his land by war, now living in a tent outside a shopping center in Lebanon with his wife and young children. “My children need to go to school, they need a future,” he added.

According to the UN, more than 125 million people are in need of humanitarian assistance, a level of suffering not seen since World War II.

These are the vulnerable and excluded that concern Francis in Laudato Si’. Clearly in this year since the encyclical came out much has changed for the worse, as much as there have been some notable advances. We continue to be challenged by the crisis our Earth faces just as we are inspired by Pope Francis’ words and example.

“Human beings”, he writes, “while capable of the worst, are also capable of rising above themselves, choosing again what is good, and making a new start….by developing our individual, God-given capacities, an ecological conversion can inspire us to greater creativity and enthusiasm in resolving the world’s problems.” (LS 205/220)

Faith in Action: Watch a 5-minute video on Laudato Si’ with your church group and family:  http://bit.ly/CAFODLaudatoSi.

Celebrate World Day of Prayer for Creation on September 1 http://catholicclimatemovement.global/