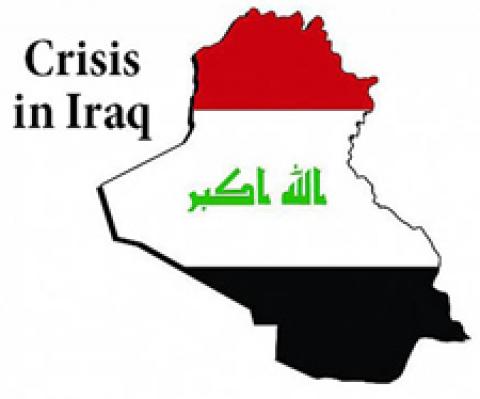 The following piece was submitted by Marie Dennis, co-president of Pax Christi International, and published in the July-August 2014 NewsNotes.

As the progression of violence in already-violent Iraq commanded the attention of the world, Pope Francis joined the call to prayer and expressed his hope for "security and peace and a future of reconciliation and justice where all Iraqis, whatever their religious affiliation, will be able together to build up their country, making a model of coexistence." Chaldean Patriarch Louis Raphael I Sako, who lives in Baghdad, called for a day of "fasting and prayer for the restoration of security and stability in Iraq," and insisted that "the best solution to all these problems is the creation of a government of national unity" to strengthen "the rule of law."

Given the history and consequences of U.S. interventions in Iraq, U.S. faith communities and peace groups spoke out quickly and clearly:

Pax Christi USA wrote: "In response to the recent unrest in Iraq and the possibility of the crisis continuing to spread, Pax Christi USA is unequivocal in its assertion that U.S. military intervention will not achieve the peace and stability that the people of Iraq deserve. A military solution—whether it include air strikes or ground troops or an increase in the flow of weapons into Iraq—will only serve to increase the suffering of the Iraqi people, not alleviate it. Furthermore, military intervention increases the risk of widening the conflict in the region. [We call] for a fully inclusive international diplomatic process to address this crisis. The crisis ... is regional in nature and requires a multi-lateral diplomatic response initiated by the United Nations and including regional authorities like the Arab League. The hope for a peaceful solution lies in an effort which addresses the political concerns of all the major factions in the region. We believe that the unfolding tragedy in Iraq is a direct, if unintended, consequence of the U.S. invasion and occupation of that country…"

Bishop Richard E. Pates of Des Moines, IA, chair of the U.S. Conference of Catholic Bishops’ (USCCB) Committee on International Justice and Peace, wrote in a letter to U.S. National Security Advisor Ambassador Susan E. Rice, "Our nation bears a special responsibility toward the people of Iraq. The U.S.-led invasion and occupation unleashed both sectarian conflicts and extremism in Iraq, two tragic unintended consequences that have profound and continuing repercussions for the people of Iraq ... It is appropriate that the administration is urging political leaders in Iraq to form an inclusive government. ... It is critical that all ethnic and religious groups are represented at the table of governance so that the common good of all is served. Extremists have been exploiting the divisions born of exclusion and the weakening of the rule of law. In addition to seeking a political solution in Iraq, it is critical to do so in Syria. The U.S. should work with the international community ... and all responsible parties in Syria ... to obtain a ceasefire, initiate serious negotiations, provide impartial humanitarian assistance, and encourage efforts to build an inclusive society in Syria."

Phyllis Bennis, writing in Foreign Policy in Focus (June 20, 2014), made specific proposals for a U.S. response in lieu of military action. She wrote: "Iraq is on the verge of full-scale civil war along the fault lines set in place when U.S. troops invaded and occupied the country more than a decade ago. We need to demand that our government do five things right away: First, do no harm. ... [End] the threats of airstrikes, bring home the evac troops and Special Forces, and turn the aircraft carrier around. Second, call for and support an immediate arms embargo on all sides. ... U.S. regional allies [must] stop providing weapons and money to various militias. Third, engage immediately with Iran to bring pressure to bear on the Iraqi government to end its sectarian discrimination, its violence against civilians, and its violations of human rights. Fourth, ... get the UN to take the lead in organizing international negotiations for a political solution to the crisis ... Those talks must include all sides, including nonviolent Syrian and Iraqi activists, civil society organizations, women, and representatives of refugees and displaced people forced from their homes. ... Building on the success of the ongoing nuclear negotiations with Iran, Washington should continue to broaden its engagement with Tehran with the goal of helping to bring the Syrian and Iraqi wars to an immediate end. Fifth, get help to the people who need it. The Iraq war is creating an enormous new refugee and humanitarian crisis, escalating the crisis of the Syrian war, and spreading across the entire region…."

Write to National Security Advisor Susan Rice (at the White House) urging the U.S. to broaden its engagement with Tehran with the goal of helping to bring the Syrian and Iraqi wars to an immediate end.