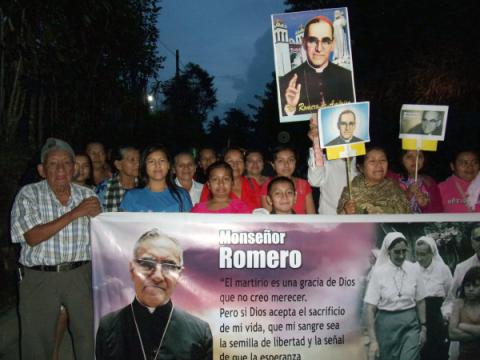 The canonization of Óscar Arnulfo Romero, the martyred archbishop of San Salvador was a true fiesta. While the actual canonization took place in Rome on Sunday, October 14, the celebration of the new saint in his home country was typically loud and colorful.

In the capital of San Salvador, several venues hosted activities with wide participation by the faithful. I live and work as a Maryknoll Lay Missioner in the rural parish of Monte San Juan, about an hour outside of San Salvador. Rather than go to the big events in the city, I chose to celebrate with the people in our parish, who have become like family to me in the six years that I have lived here now.

Like the San Salvador celebration and those in many parishes around the country, we had a march or procession on Saturday evening, which was followed by a Mass and an all-night vigil. For those who could stay awake, the vigil culminated in watching the papal Mass live from Rome, at 2 a.m. our time.

Rather than walking the city streets, our march went from the village at one end of the parish the mile or so to the main church in the center of the town. While the vigil in the city included professional musicians and well-choreographed cultural events, ours was home-grown and heart-felt and featured local youths, some “performing” in public for the first time.

We had four choirs from different villages who enlivened the march. Another led the music at Mass and yet another kept people awake during the night – all with songs about Romero and other music that got people on their feet, clapping and interacting with each other.

Despite some technical problems, we were able to watch a couple of videos about Romero as well as the televised Mass from Rome on a sheet strung up in the church and projected from a laptop computer.

The young people also made a very moving if not flawless presentation of some of the many other martyrs of El Salvador. Those honored include the four U.S. churchwomen (two Maryknoll Sisters, an Ursuline Sister and Jean Donovan, who trained with the Maryknoll Lay Missioners) killed here in 1980, and two catechists from our own parish of Monte San Juan.

One youth group painted a new (the third) Romero mural on the side of the church, this one depicting the new saint among the Salvadoran people and with his friend, also martyred Jesuit Father Rutilio Grande. Our pastor, Father Mauricio Saravia, blessed a new bust of Romero at the entrance of the church.

We ran out of time for some of the planned activities, but everyone who came from all 12 villages of the parish got to enjoy tamales and coffee, which all the communities provided.

During the Mass, when Pope Francis named Romero among the new saints, we stood and applauded and, of course, people shot off lots of fireworks and rang the church bells!

A few months ago, after the date for the canonization had been announced, we were discussing how we would refer to the new saint—‘St. Óscar,’ ‘St. Romero,’ etc. A priest from a nearby parish, Father Luís Coto said, “He’ll always be ‘Monseñor’ to us,” indicating the respect and love the people have for him. As we were walking in the evening procession, I heard a child behind me read the message on one of the posters: “The voice of the voiceless.” Her father then explained to her, “In those days you couldn’t say anything against the government or speak up about the bad things happening. But Monseñor wasn’t afraid to denounce the evils and that’s why they killed him.”

During our celebration I asked Gerardo, now in his 80s, what Archbishop Romero meant to him; he said: the truth and the light. “There were two sides during that time, and you couldn’t believe either of them, but Monseñor Romero spoke the truth. He was the voice and the light to follow.”

While there are countless Romero followers especially among the poor, one of the great challenges today is convincing a still significant part of the Salvadoran population, including many within the church, of the truth about him. Assassinated while celebrating Mass by forces of the powerful ruling elite backed by the military of the 1970s and ’80s, Romero was appropriated by the left and his history was manipulated by both sides of the armed conflict that continued for the next 12 years.

Since his beatification in 2015, there has been a more concerted effort to spread the truth about his fidelity to the church, his compassionate and outspoken support for his people, particularly the poor, the vulnerable and the voiceless, his pleas for dialogue instead of violence, and his clamor for justice without siding with any political forces. Hopefully his recognition as El Salvador’s first saint will bring about a greater understanding of his life and virtues, and serve as an example of faithfulness for more of us to follow.