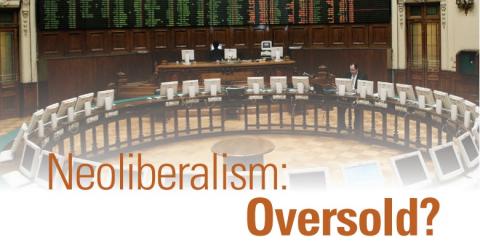 A new study by three members of the research department of the International Monetary Fund (IMF) has stirred some controversy. The study, entitled “Neoliberalism: Oversold?” shows that policies required by the IMF for many countries have actually had negative effects on both countries’ economic growth and their ability to address human needs. The authors found that two principal policy recommendations– allowing free movement of capital across borders and austerity policies – have had questionable positive influences and clear negative consequences.

In the late 1970s, the debts of many countries in the global South to banks in the global North exploded after the United States raised its interest rates in an effort to quell rising domestic inflation. Many countries were unable to maintain their debt payments and the “international debt crisis” was born. In response, the IMF bought much of the debt and guaranteed the indebted countries’ payments. In exchange, the IMF demanded political and economic reforms known as “structural adjustment programs.” Economic theory suggested that these policy changes would improve economic performance, but this study shows that the negative effects of these policies have been underestimated.

One of the central policy changes required of most countries was to open national markets, especially financial markets, to international competition. The theory was that this would increase efficiencies and economic output. Yet the study found that “Although growth benefits are uncertain, costs in terms of increased economic volatility and crisis frequency seem more evident.” The authors add, “In addition to raising the odds of a crash, financial openness has distributional effects, appreciably raising inequality.”

The other central policy requirement was “fiscal consolidation,” more popularly known as austerity measures – cutting back on government spending through a combination of privatization of public services, increasing taxes and/or lowering government spending in all areas except debt payments. The authors write, “the notion that fiscal consolidations can be expansionary (that is, raise output and employment), in part by raising private sector confidence and investment, has been championed by [various economists].

However, in practice, episodes of fiscal consolidation have been followed, on average, by reductions rather than by expansions in economic output. On average, a consolidation of one percent of GDP increases the long-term unemployment rate by 0.6 percentage points and raises by 1.5 percent within five years the Gini measure of income inequality.

Increased inequality not only results in poorer living conditions for many, but also in decreased economic growth- the very goal of the IMF. As the authors explain, “Since both openness and austerity are associated with increasing inequality, this distributional effect sets up an adverse feedback loop… [as] there is now strong evidence that inequality can significantly lower both the level and the durability of growth.”

Indeed, as the Maryknoll Office for Global Concerns and others have argued the negative effects of these policies outweigh any predicted benefits. As Mark Weisbrot, co-director of the Center for Economic and Policy Research has documented, these policies have had significant negative effects on economic growth and quality of life around the world, especially in low and middle-income countries.

Comparing three 20-year periods (1980-2000, when neoliberal policies were forced on many countries through IMF structural adjustment programs and the two-decade periods before and after when alternative economic policies were more common), Weisbrot shows that in Latin America, GDP growth per capita averaged 3.3 percent per year from 1960-1980, plummeted to 0.3 percent during the “lost decades” of 19802000 and increased in the following twenty years to 1.9 percent annually.

Weisbrot explains, “the long-term slowdown in growth experienced by the vast majority of developing countries during the post-1980 era was associated with a noticeable decline in the rate of progress on health indicators, including life expectancy and adult, child, and infant mortality.”

Unfortunately, though the IMF has become more open to publishing alternative opinions like this, it is unlikely to result in any change in policy. The U.S. retains its veto on important votes and industrialized countries in the Organization for Economic Co-operation and Development (OECD) form a voting bloc that holds a significant majority of the votes.

Image: The stock exchange in Santiago, Chile, one of the first countries to adopt neoliberal poliities, on the cover of "Neoliberalism: Oversold?"