Cooperativism, Catholicism and the future of work 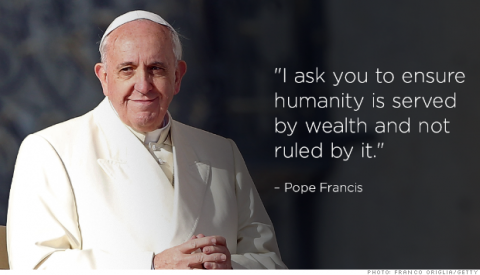 The New Economy Coalition, of which the Maryknoll Office for Global Concerns is a member, recently launched a new campaign called “Now We Own” to promote the importance of collective ownership in creating a more equitable and sustainable economy by highlighting examples of collective enterprises among its members. The following article was published in the September-October 2017 issue of NewsNotes.

For Catholics, collective ownership is not a new concept. The Church has been intimately involved in most of the major examples of collective enterprises throughout its history. While the issue of ownership has always been important for economic equality and sustainability, it is becoming increasingly important as more workers are replaced by robotic technologies.

The Christian communities formed after Jesus’ crucifixion were collective endeavors. Twice in the book of Acts we read of how these early Christians pooled their resources in the service of others. For example, “All who believed were together and had all things in common; they would sell their property and possessions and divide them among all according to each one’s need.” (Acts 2:43-45)

In a soon-to-be published book on the role of cooperative enterprises in Catholic economic thought, Nathan Schneider, a contributing editor for Religion Dispatches and Yes! Magazine, who was one the first journalists to cover the Occupy Wall Street movement, describes the Catholic influence on larger cooperative efforts throughout history. For example, in 1900, Alphonse Desjardins, a committed Catholic in Quebec, Canada, began the “Mouvement des Caisses,” a federation of credit unions that is currently the largest financial intermediary in Quebec. He also helped to create the first credit union in the United States - St. Mary’s Bank in New Hampshire.

In the 1940s, Catholic priest Jose Maria Arizmendiarrieta founded the Mondragon cooperative movement in the Basque region of Spain, which has grown into a global network of hundreds of cooperatives, banks, schools and more, all owned and governed by its more than 73,000 members. In Antigonish, Nova Scotia, Fathers Jimmy Tompkins and Moses Coady used their Jesuit university’s extension program to help organize close to 200 community organizations during the Great Depression, which, in turn, created numerous cooperatives, credit unions and study groups.

Catholic support of collective efforts continue today. In the United States, the Catholic Campaign for Human Development is a significant supporter of numerous cooperatives around the country and many Catholic hospitals act as anchor institutions by purchasing from cooperatives as well as providing them with much-needed loans. Around the world, Caritas Internationalis, a confederation of Roman Catholic relief, development and social service organizations, and numerous other missionary organizations are helping many thousands of cooperative efforts worldwide. For example Maryknoll Sister Mary Gabriella initiated the credit union and cooperative movements in Korea in 1960.

We are now at a time in history in which collective ownership is becoming more important. Many economists predict a wave of layoffs as new technologies replace human labor. While the threat of robots replacing millions of workers is unlikely to be as drastic in the short term as some have written (global productivity growth rates are at historic lows; economic growth is slow; and corporations are investing little in new technologies), it is likely to have significant effects in the middle and long terms. Yet, improved technologies need not result in massive numbers of destitute, unemployed people. Collective ownership can help ensure that the benefits of increased productivity are fairly distributed.

“If machines produce everything we need, the outcome will depend on how things are distributed,” the famous scientist Stephen Hawkings explained. “Everyone can enjoy a life of luxurious leisure if the machineproduced wealth is shared, or most people can end up miserably poor if the machine-owners successfully lobby against wealth redistribution.”

It is the resilience of cooperatives that is especially appealing in times of economic insecurities. UN Secretary-General Ban Ki-Moon said, “With the world facing multiple crises, and with natural disasters testing even the most robust economies and communities, cooperatives have meanwhile maintained high credit ratings, increased assets and turnover, and expanded their membership and customer base.” An International Labor Organization study showed that “financial cooperatives out-performed traditional investor-owned banks before, during and after the global financial crisis in 2007 and 2008 and pointed to their long-term stability.”

Faith in action: See inspiring examples of collective ownership at the “Now We Own” campaign at the New Economy Coalition website https://neweconomy.net/ and their social media sites. Consider ways you could support their efforts.