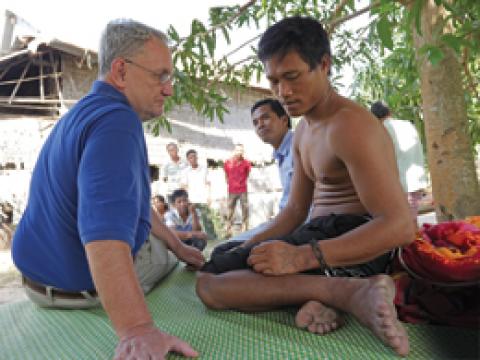 The following article examines the controversial decision by the World Bank to resume loans to Cambodia after a five-year moratorium despite a dramatic increase in human rights abuses in recent months. This article was published in the September-October 2016 issue of NewsNotes.

In June, the World Bank approved $130 million in new loans to Cambodia. Matthew McGuire, the Bank’s U.S. executive director and former director of the Office of Business Liaison at the U.S. Department of Commerce, abstained. The U.S. Treasury Department, the Bank’s largest shareholder, in a statement about its decision to abstain, said: “Unfortunately, the government of Cambodia appears to be reducing its openness to feedback from its citizens and civil society groups. The Unites States hears consistent complaints that the Cambodian government, at all levels, is growing less responsive to citizen feedback.”

The government has repeatedly blocked a peaceful “Black Monday” campaign that calls for the release of the five detained human rights defenders. As demonstrators dress in black to mourn the state of human rights, police have repeatedly blocked from gathering and detained them for hours. Around the country, groups collecting petition signatures have been subjected to questioning and arrest.

The World Bank’s decision reversed a lending freeze that had been in place since August 2011, when the Cambodian government forcefully evicted 3,000 families living next to the Boeng Kak Lake, which raised concerns of human rights abuses. At that time, a real estate development company with close ties to Prime Minister Hun Sen and major donors to the Cambodian People’s Party filled in a lake with sand in order to build a high-end residential complex. This caused serious flooding in the surrounding villages. Thousands of families had to flee their homes. Neither the company nor the government properly compensated those affected.

The new loans approved by the World Bank include $25 million for a second phase of the controversial Land Allocation for Social and Economic Development (LASED) project. In the previous phase of LASED, the World Bank had set up eight social land concessions to help thousands of impoverished families access land and secure tenure. However, a study published by the Cambodian League for the Promotion and Defense of Human Rights found that many families had abandoned their sites because of infertile soil, conflicts over land ownership, and promised infrastructure that never materialized.

The World Bank, in a statement about the approval of the new loans, said the decision to restart funding to Cambodia was made after “extensive consultations with stakeholders across Cambodia, including government officials, local and international civil society, private and business sector, academia, development partners and UN agencies.”

However, as reported in the July-August 2016 issue of NewsNotes, Maryknoll Missioners in Cambodia and nearly 40 other international organizations there issued a public appeal to the government to stop the repression and human rights abuses, which have dramatically increased this year.

The timing of the World Bank’s decision concerning Cambodia is surprising, though, unfortunately, the action itself is not shocking. Once again, the World Bank seems to turn a blind eye to human rights concerns.

Faith in action: Come and see the Maryknoll mission in Cambodia. Join an immersion trip with Friends Across Borders in August, 2017. Deadline for sign ups is February 11, 2017. Learn more at: http://bit.ly/2chdFOJ.

Photo: Maryknoll Associate Priest Kevin Conroy, left, is a trained psychologist working with the Maryknoll Mental Health Team in Cambodia. In this photo, Father Kevin visits a home where a family member is chained to a bed because there are no mental health services to help care for the man. Read this story in the July/August 2016 issue of Maryknoll Magazine, at www.maryknollmagazine.org. Photo by Sean Sprague.