A call to empathy, a call to live in the light 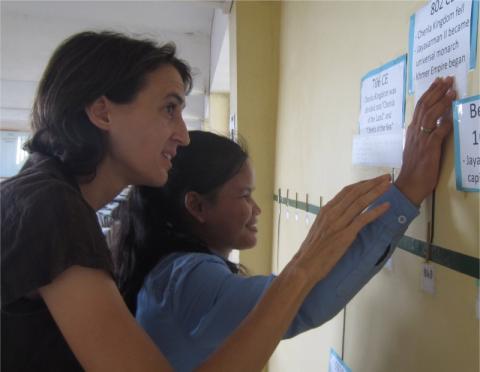 Maryknoll Lay Missioner Maria Montello in Cambodia reflects on the rise in reported hate crimes in the United States. This reflection was published in the January-February 2019 issue of NewsNotes.

In Chapter 4 of Ephesians, St. Paul encourages the people of Ephesus to be “kind and compassionate… imitators of God, as beloved children, and live in love.” How far we are from following Paul’s commissioning, from accepting this responsibility.

I was dismayed to hear about recent violent acts in the United States. Within 72 hours, eleven Jews killed in a synagogue, two African-Americans killed while shopping, more than a dozen pipe bombs sent to politicians and people who have been criticized by the president.

Reported hate crimes in the United States rose 17 percent in 2017, the third consecutive year that such crimes increased, according to FBI data that shows an even larger increase in anti-Semitic attacks.

It seems it’s not safe to do much of anything these days: open your mail, shop at a grocery store, go to religious services, a music concert, school, you name it. While the perpetrators of these crimes appear to be mentally unstable people and not representative of the average American, one can’t help but ask where are the “good people”?

Are Americans not good and noble people?

In the history of the United States, important social and political movements have often been driven by ideas: the Suffragettes thought women should vote, the Allies thought Jews should be protected, Americans thought black citizens should have equal treatment, young people thought the United States shouldn’t be killing Vietnamese, people of reason thought the growth of nuclear weapons should be stopped, and on and on. These were good ideas and, in several cases, those ideas led to good actions.

Many philosophers argue that actions are motivated by emotion more than rational thought or ideas. Even if only partially true, this is worth examining.

Emotions can be dangerous. Emotions such as fear and anger, are powerful forces. Their strength lies deep within us at the level of self-preservation and their roots are old. When we were knuckle-dragging primates, we didn’t likely have the capacity to feel someone else’s pain. We had only to think about protecting our children and hunting for food. Fear and something like anger were necessary for survival Good and noble ideas were not.

Emotions such as empathy are evolutionarily newer. People’s concern for women, black and Jewish Americans, and people living in poverty—where did that concern come from? Is it not from stepping into the shoes of those people and seeing the world as they see it? Such ideas and actions stem from that which is most human in us. Research in philosophy, in psychology, even in the hard sciences, states that it is empathy that sets humans apart from other animals. Empathy is at the root of our most generous actions. Empathy is a powerful, if not the most powerful, deterrent to violence.

What is behind these recent acts of violence? Surely they are justified by bad, hateful ideas. But, it is likely the perpetrators of the violence are motivated by a lack of empathy. They are broken.

This is a defining characteristic of the psychopath – no capacity for empathy. The men who committed the three violent acts within 72 hours will likely be diagnosed as such. Some will say they are less than human, an aberration of nature – or not.

It is estimated that one in one-hundred men are psychopaths. They are not only the people who send pipe bombs to politicians and open fire on innocents. They run companies and nations. Some are nasty. Some are relatively benign. It depends on the environment in which they live. For a psychopath to be “activated” to commit an act of violence, there need to be certain tools and conditions: social isolation perhaps, a hateful ideology, a weapon. These tools and conditions are readily available, unfortunately, on the internet and in a society where it is easy to buy a gun.

What are our leaders doing to the United States?

St. Paul warns against “suggestive talk” and being deceived by “empty arguments”. He reminds us: “You were once darkness but now you are light in the Lord.” Today is not only a time to think critically, to examine talk and arguments carefully. It is a time to reclaim our humanity and let empathy motivate and inspire our ideas and actions. Most importantly, it is a time to reclaim our place as children of God and, as St. Paul says, to “live as children of light.”