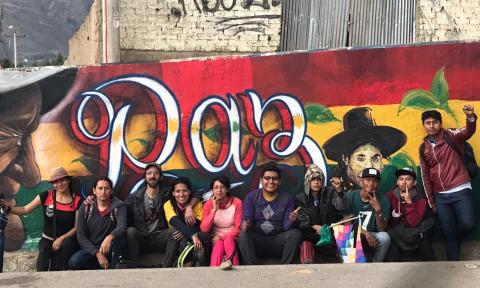 Dan Moriarty, an MOGC staff member and returned Maryknoll Lay Missioner who lived in Bolivia for 17 years, examines the political crisis and ways to restore democracy and protect indigenous rights in Bolivia.

Since Evo Morales resigned as president of Bolivia on November 10, there have been a number of good public debates and think pieces on the question of whether what happened is best described as a "coup" or an "uprising." While the world debates, ordinary Bolivians have lived through the most frightening weeks of conflict, violence, and chaos since the country returned to democracy in the early 1980s, after decades of coups and military dictatorships. Members of Morales’ Movement Toward Socialism (MAS) party have threatened civil war, and political leaders of the racist, revanchist Bolivian right have taken advantage of the crisis, moving quickly to grab back the power they once enjoyed.

Fortunately, there are also signs Bolivians may have stepped back from the brink, as they have done so many times before. As both left- and right-wing militant groups and the armed forces have clashed in the streets, other voices have called consistently for peace, and both political and civil society leaders are now engaged in promising dialogue. But the crisis isn’t over yet, which means constructive international engagement with Bolivia is still needed.

[Also available online: The Maryknoll Office for Global Concern's statement on the political crisis in Bolivia]

Some observers in the Latin American solidarity community and the international left have rushed to make righteous proclamations about a U.S.-backed, right-wing coup against Morales. Such overly simplistic statements not only betray the complexity of what is happening in Bolivia; they make a right-wing takeover more likely. Few of us who have lived in Bolivia in recent years understand what is happening in such black-and-white terms. True solidarity requires nuance. For Bolivia, it means supporting reconciliation, not inflaming divisions, so that the majority of Bolivians who have previously struggled together for justice can salvage both their democracy and the progress they have fought so hard to achieve.

Whatever abuses Morales committed, and regardless of whether one believes he deserved to be ousted for them, it is important to recognize that Bolivia’s impoverished indigenous majority saw progress under his government – particularly in his first term – like at no other time in their centuries-long history of colonialism, exclusion, exploitation, and oppression. Statements in the press by Bolivians protesting his reelection in recent weeks indicate that they recognize this, but object to Morales’ increasingly undemocratic strongman rule and his anti-environmental extractivist and agro-industrial schemes, and various other ways they feel he has betrayed his original vision.

About two thirds of Bolivians once supported Evo Morales at the polls. That support has decreased by about 40 percent in recent years, particularly after two crucial events:

In 2011, in the small town of Chaparina, the national police brutally attacked indigenous peasants marching to stop the Morales government from building a highway through protected jungle in their territory – an atrocity many see as emblematic of a number of betrayals by Morales’ administration.

Then, in 2016, Morales proposed a constitutional amendment that would have allowed him to run for a fourth term as president (the current constitution allows for two terms, but his first term took place before it was passed, so he was allowed to run twice more). The people voted down the proposal. Rather than abide by the will of the voters, Morales’ Movement Toward Socialism (MAS) party sued, saying that term limits were a violation of his human right to political participation. A court comprised entirely of MAS appointees agreed, allowing him to ignore the constitution and the referendum results and run again. The widespread outrage this caused cannot be overstated.

Tensions and protests have been building for years.

The movement that ousted Evo Morales includes people from every ideological, ethnic, geographic, and class background in Bolivia. Indigenous and union leaders, feminists, environmentalists, liberation theologians, leftist intellectuals, human rights and land defenders, rural and urban laborers, and legions of former MAS partisans took to the streets calling for Evo to step aside. When influential progressive figures such as Bernie Sanders, members of “The Squad” and Code Pink, Jeremy Corbyn, Noam Chomsky, Roger Waters, or Amy Goodman’s guests on Democracy NOW! reduce what happened to a right-wing coup, they effectively erase this important bloc of Bolivians.

If the fascistic right wing in Bolivia, which is surely receiving support from the United States, is to be stopped, Bolivians need reconciliation, and fast. As ugly as things have gotten between them, a large bloc of those protesting Morales must make common cause with his supporters now to stop the return of racist and exclusionary policies that plagued Bolivia for centuries.

There are alarming signs that dark forces are swooping into government: religious posturing that denigrates indigenous traditions and identity, calls by right-wing civic leaders to jail MAS leadership, and the politicization of elements of the military. Most alarming is interim president Jeanine Áñez’s Decree 4078, which gives legal immunity to the armed forces. Its passage was followed by multiple incidents in which soldiers and police shot and killed Morales supporters.

But there have also been a number of gestures to suggest opposition leaders want – or at least feel obligated to pursue – democracy. Áñez has called for elections and dialogue. Both left-and right-leaning opposition leaders support including the MAS, but not Evo Morales or his vice president, Alvaro Garcia Linera, in those elections and in the new government.

There is still a chance to restore democracy and protect indigenous rights in Bolivia.

From exile in Mexico, Morales has continued to provoke division and conflict, making contradictory statements that leave the door open to his return. “If my people want it, I will return to pacify the country,” he says. But it is difficult to imagine a lasting peace, if any, were he to reclaim power now. Just as likely, Bolivia would explode. Civil war remains a real possibility. The Áñez government has already announced terrorism and sedition charges against Morales, and MAS leaders are pushing for amnesty instead. But in negotiations, MAS legislators and party activists have repeatedly accepted that Morales and Garcia Linera will not be allowed to run in new elections.

The current moment offers the best chance for peace and protection of the advances indigenous Bolivians made with Morales – and deserves cautious, nuanced international support for dialogue. Parroting boilerplate denunciations of a U.S.-backed right-wing coup and standing by Morales emboldens violent and intransigent MAS militants and deepens divisions in Bolivia – division the extreme right is counting on to gain power. It alienates progressive blocs of anti-Morales protesters, who may feel forced to gamble by supporting right-wing leaders in the short term as the only way of salvaging democracy for the long term. If the solidarity community and the international left really want to stop fascism in Bolivia, they will let go of their pro-Morales posturing and denunciation of the protests that led to Evo’s resignation, and focus on supporting Bolivians in the struggle at hand now.

Dialogue and solidarity between opposing factions is the way forward.

Various demonstrations of dialogue and solidarity between opposing factions in recent weeks provide hope for a path forward.

These are all the kinds of efforts solidarity communities should be encouraging.

The international community must continue pressuring the interim government to hold free, fair, and transparent elections, and to refrain from pursuing a politically divisive agenda for which it has no democratic mandate. We should join Bolivian human rights groups in demanding the repeal of Presidential Decree 4078. As fake news swirls and opposing sides promote conflicting versions of violent incidents in real time, we can encourage international human rights investigations, such as the forthcoming report from The Inter-American Commission on Human Rights in calling for international human rights investigations to clarify facts and discourage further violence. Those with public platforms on the international left should be listening to Bolivians, allies from both pro- and anti-Morales movements. Rather than choose between them and inflame their differences, we can best protect the historic advances of the last fourteen years by encouraging them to build a new movement together.

Photo: Members of the artist group known as Colectivo Epidemia sit in front of their mural for peace on November 24, 2019, in the Bolivian town of Sacaba, site of a violent clash on November 15 between police and coca growers sympathetic to ex-President Evo Morales that left at least nine protestors dead and dozens injured. Photo courtesy of Carolina Baldivieso Peñaranda.