Aboriginal and Indigenous Spirituality: "They are me and I am Them" 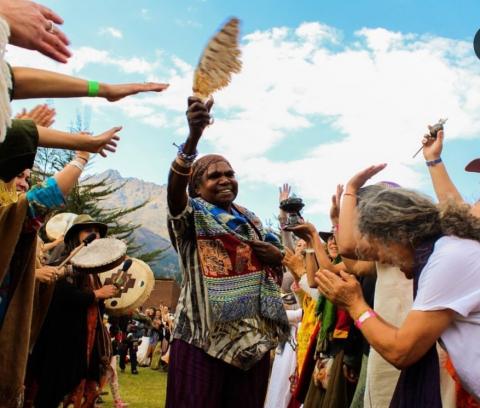 In an interview with Maryknoll Lay Missioner Kathy Bond, an Aboriginal woman and traditional healer from Australia describes the kinship she feels with the indigenous people of the Amazon. She identifies common aspects of their spiritualities and explains how she feels when indigenous ways of life are threatened in any part of the world.

Miliwanga Wurrben is a traditional Rembarrnga women and Elder from the remote Central Arnhem region in Northern Territory of Australia. Miliwanga comes from a family line of traditional healers and is an advocate for sharing the importance of traditional Indigenous healing modalities as well as working as a Traditional Cultural Education Consultant. As a traditional artist, weaver, and healer, she has overcome adversity in her own life and now stands as a leader and Elder in her community and as an advocate for the rights of Indigenous People.

Miliwanga has educated medical students and mainstream health providers about traditional bush medicine and other traditional health therapies. Miliwanga also co-facilitates regular weekly Yarning Circles, sharing culture and promoting reconciliation and support for children and families. As a gifted public speaker, Miliwanga often travels nationally and internationally to share about her spirituality and her work.

“It has taken me many years to find the words and ways to give meaning to an intricate, complex culture," says Miliwanga. "To be able to explain so that people understand the depth and uniqueness of Aboriginal Spirituality expressed through culture. So many times, we talk about it and people would not really get the grip of what we are saying. I am hoping I may help.”

This interview took place at the Convergence of International Women: We are Medicine gathering this past September in Peru:

We have lived in our culture since our ancestral times. Our culture is very important to us.  Our culture is not only made up of traditional ways but also it holds our spirituality, which has always sustained my people. All different tribal groups, especially in the northern part of Australia, where they all live in remote communities, have all their traditional ways that they still live and abide by.

My work that I do is for the well-being of our people.  As a traditional healer and herbalist, seeing things that happen such as the fires in the forest of the Amazon has made my heart cry. They remind me of the fires that I have seen on the islands of Borneo of the Dayak tribe. Even though I come from another tribe and I come from another country, to see such things as these disasters brings great sadness to my heart.

We are able to feel this because we are part of this world that we live in, this spiritual world.  I am not a Christian. I do not belong to any religious organization. I am just a traditional spiritual teacher with everything that has been handed down to me through the lines of my families, the traditional healers and herbalists, the keepers of the law, and the holders of wisdom, knowledge and understanding about traditions and laws. To see such disasters in the big cities, of course, such as buildings that are hit with explosions, is difficult. We see the bad things that happen in the city, like the people of the Amazon forest see.

My heart weeps because I see that this fire takes away all that they live for daily.  All the resources come from the forest. Everything in the forest has always sustained their lifestyle, their living. That is their supermarket; it contains everything they ever want. It is the same with me and my people. The bush is our supermarket. It has everything we need.

And for one to go and destroy a place like this -- these people have hard hearts. They are heartless people. Why? Because in our traditional spirituality, we do not hold such things as hatred or revenge. There is no such thing for all of this. Moreover, there is not time for this negativity. Our people -- and I am not only talking about my people, but all of the Indigenous people of the world -- live in peace and harmony. We can connect with each other. It has always been a heart-to-heart connection with the original people of this world.  It is very sad to see other people lose their traditional spirituality because they cannot find their roots. Therefore, this hatred takes place in their heart and soul. They come up with doing bad things such as terrorism and burning forests.

We feel for them because they are human like us.  Moreover, they are people that we see as heartless.  Nevertheless, I pray. I saw the fire in the forest from where I was in Australia before I flew out.  I was constantly praying to the Great Spirit and to the ancestral spirit of the land.  I know the spirit of the land is with those people, keeping them safe. That is our belief and that is their belief. We have been praying for the people of the Amazon forest. Because I feel for them.

They are me and I am them.

Photo from the Convergence of International Women: We are Medicine conference in Peru.