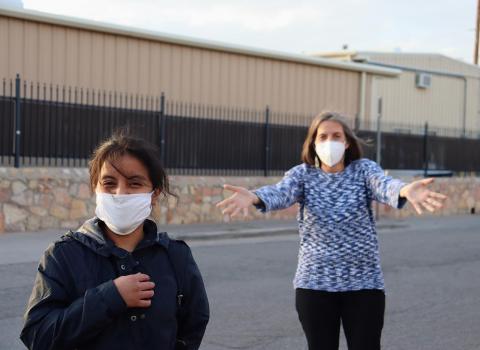 ***UPDATE, October 27, 2020: América has been released! Thanks to all for their advocacy on her behalf.

Maryknoll Lay Missioner Heidi Cerneka says, "It was another 'it takes a whole village' to release a migrant! América was released because of the persistence of the staff at Las Americas and our support around the country, from people who sent her letters of support to prayer warriors to twitter warriors and our friends at miles4migrants who got her a ticket to Seattle where her sister lives in record time."

On October 23, 2020, El Paso Matters, a digital newspaper serving the communities of El Paso and Ciudad Juarez, reported on the dire situation of an indigenous woman from Guatemala held by U.S. Immigration and Customs Enforcement (ICE) in El Paso, Texas, despite having won her case for freedom three weeks earlier.

Maryknoll Lay Missioner Heidi Cerneka, an immigration attorney in El Paso, has issued an urgent plea for all people who support justice, equality, and the rule of law to contact ICE Enforcement and Removal Operations Head Quarters in Washington, D.C. to call for América’s immediate release.

América is a strong and thoughtful person.

Speaking in the Mayan language of Mam, América describes the culture of the nearly half a million Mam people who live in parts of Guatemala and Mexico as different from that of the majority of Guatemalans. “We do everything differently. We farm. We use nature and natural healers. We sometimes wear shoes. I am a weaver, and I weave huipiles, our traditional clothing.”

América won her freedom on October 5 but she is still not free.

Proving one’s case is no easy task for anyone seeking asylum. América had to demonstrate a more than 50 percent likelihood that she will be persecuted if she returns to Guatemala.

The United States is still trying to deport her.

ICE has responded to the court’s decision by contacting consulates in three other countries to ask for permission to deport her to a third country.

ICE has the authority to release her, either due to the grant of ‘Withholding of Removal’ on October 5th, or under ICE supervision while they sort out the responses from other countries.

For asking for protection under U.S. asylum law, América has been detained for over six months in the El Paso ICE detention center where she contracted COVID-19, and despite all of that, battled to win her case in immigration court.

There is a pandemic raging in the United States. Detention centers have a much higher incidence of infection precisely because the collective living conditions cause the rapid spread of infectious diseases.

People live in crowded, close spaces, sharing sleeping space, toilets, sinks, showers, telephones, and meal areas. They have no opportunity to exercise or practice healthy living habits. Disinfection does not happen frequently enough and another wave of the coronavirus has hit the detention center.

In the isolation of the detention center, surrounded by sickness, América is suffering under the stress and strain of winning her case yet still detained and with no information.

(If you choose #1 for English, then choose #6 to speak to the next available operator.)

I am contacting you out of concern for the welfare of América. The digital newspaper El Paso Matters reported on October 23, 2020, that, despite the courts granting her 'withholding of removal' on October 5, América remains detained at the El Paso Detention Center. The El Paso field office has told local advocates that the decision is pending at head quarters. So I am calling to demand that ICE follow the direction of the court and release her immediately. Thank you.