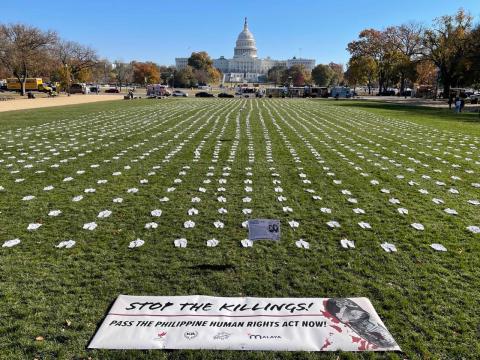 The human rights situation in the Philippines is dire.

Under the current administration of President Rodrigo Duterte, infamous for his statements encouraging law enforcement to kill drug suspects and promising police immunity, over 30,000 Filipinos are believed to have been killed by police and other Philippine security forces. The International Criminal Court has found evidence of crimes against humanity and Global Witness has named the Philippines as one of the deadliest countries in the world for land defenders, journalists, trade unionists, and activists.

In the words of Filipino Bishop Gerardo Alminaza, “In sadness, we are all crying out: End the killings! These barbaric and calculated assassinations must end… May the growing death list disturb the conscience of the murderers. It is my ardent prayer that instead of perpetrating violence, they may open their eyes to the reality of truth – that life is precious, that it is a sin to kill.”

See the display of 3,000 “Tsinelas,” or sandals, on the National Mall in Washington, DC, on November 18, to represent the 30,000 killed under President Duterte in the Philippines.

Despite the cries of Filipinos and the prayers of the Church, since Duterte took office in 2016, the United States has provided over $550 million in military aid to the Philippines, and implemented paltry human rights restrictions and oversight. Federal money should go toward fighting the current pandemic, not to supporting President Duterte’s human rights violations in the Philippines.

The Philippine Human Rights Act was re-introduced by Representative Susan Wild of Pennsylvania, with 26 co-sponsors. It calls for the United States to suspend security assistance to the Philippines until the government respects the human rights of its citizens.

Click here to ask your Representative to support the Philippines Human Rights Act.